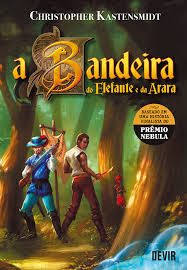 In previous post I commented on how some historical periods were or are used in the constitution of entertainment products. I mean, those related to media, movies, comics or literature. In this sense, we have series and works stuffed with samurais, vikings, knights, cowboys, etc.

YVY is a series that wants to explore the colonial era of the American continent for this purpose. Its action takes place during an uncertain period, between the end of century XVII and beginning of XVIII. While we thought and developed our idea, we got in touch with works that had already searched for the same line. One of them is The Elephant and the Macaw Banner.

Written by Christopher Kastensmidt, the universe of The Elephant and Arara Banner is based on an unusual pair, Gerard Van Oost and Oludara, a Dutchman and an African of Yoruba origin, who form a flag of two individuals, and they live fantastic adventures in the jungles and cities of colonial Brazil, meeting and / or facing mystical creatures of Brazilian folklore.

The series is found in the form of literature, comics and RPG and is an excellent way to know elements of Brazilian history and culture, as you can see the exquisite research work done in its elaboration. Having already been used in reading projects in some schools in Porto Alegre, a city in the south.

The nationality of its creator (he is from USA) does not seem to interfere in any way in the construction of the representation of the life of the inhabitants of colonial Brazil, just as the creators of Tex also were not of the USA. Scenarios and interesting figures exist all over the world and out of it, just a distinct look and creativity.